In the modern era of the GPS and other electronic navigation devices, the use of a good old fashioned compass has become something of a lost art. Though it has been used for centuries by sailors, outdoorsmen, and the military, the technique has fallen by the wayside thanks to the Information Age. But what do you do when the batteries run out, or your favorite navigation device is rendered useless by forces of nature? This, of course, is where the old standard of navigation proves most useful. Whether your technology doesn’t work or you’d like to try adventuring the old fashioned way, you can use the following compass method to navigate effectively.

The First Step: Learning Your Compass 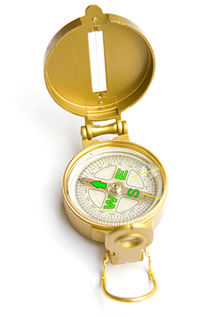 There are three main parts of the compass that you need to know in order to use one for basic orienteering. The first is the red half of the needle, known as the compass needle. This is the key information bearing piece of the device. It always points toward Earth’s magnetic north pole. The second part is the compass housing. It is a circular, adjustable structure with degree marks included. You’ll use these to help determine the exact direction in which you want to travel. The final part of the compass you need to know is called the direction arrow. It’s usually painted on the outside of standard compasses, and will serve as the arrow you follow when actually making headway.

Using Your Compass to Determine Direction

Orienteering with a compass can be delved into with much more detail. In fact, there are entire volumes of literature focused solely on navigation with a compass. But even knowing how to do something as simple as finding direction with one is an incredibly useful skill, no matter what other navigational aids may exist.

One Reply to “Outdoor Skill Tips: The Basics of Using a Compass”