When you come in contact with a live frog, your first instinct isn’t to think “Hmm, that looks tasty”. They’re ugly, green, and (thanks to a very persistent old wives’ tale) are thought of as wart spreading fiends. What you might not know is that they’re also considered a delicacy in many parts of the United States. When cooked properly, they actually taste much like everyone’s favorite white meat: chicken. Use the following guide to give them a try for your next outdoor supper. 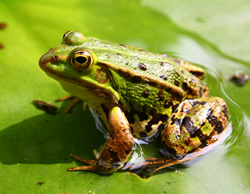 If you’re planning on harvesting the frogs yourself, then you’ll need a little crash course in a hunting practice called “frog gigging”. Usually done at night, this hunting technique involves a flashlight and a two pronged spear called a gig. Use your flashlight to scan the shoreline of a small body of water (any old farm pond will be teeming with frogs in the summer). When you see the bright reflection of a frog’s eyes, creep up to it and take your prey with a strong downward stroke of the spear.

Getting the Frog Legs Ready to Eat

When you’re satisfied with your catch, take the frogs back to your house or campsite and inspect them to make sure they’re all “edible frogs”. You’ll be able to tell because they’re a brighter green than toads, typically have very dark stripes or spots, and have relatively smooth skin. You will first have to skin the legs, which can be done by making an incision in the skin of the frog’s lower back and pulling the skin in a downward direction toward its back feet. Once they’re bare, you can easily detach the legs at their hip joints using your fingers.

Making great frog legs is much like frying fish. First, cover the bottom of a skillet with cooking oil. For batter, combine your favorite brand of breading with an egg and, optionally, a little salt. Dip each frog leg in the batter, and place them in the skillet. Keep the frog legs on a medium heat for about twenty five minutes, turning them occasionally. When that’s done, your frog legs are ready to enjoy!

From the pond to the plate, harvesting and cooking your own frog legs is a fun and relatively easy process. As slimy as they look and feel, frogs really do make for the outdoorsman’s equivalent to tasty chicken wings. The next time you go camping, make good use of your fishing license by adding some amphibian to your list of outdoor foods to try.