Few groups are as environmentally conscious as those who love the outdoors. But, ironically, the things we do on camping trips often contribute pretty heavily to environmental problems at large. If you’re interested in maintaining the outdoors for your children and future generations, it may be worth it to take the extra time and effort to camp more green, so to speak. Read on to see how to start camping in an environmentally friendly way. 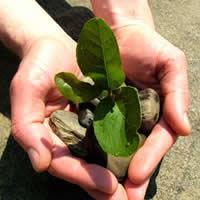 Fossil fuels, as most know, are one of the largest contributors to negative environmental effects in the world. When burned, they release carbon dioxide into the air, trapping radiation from the sun and, over time, causing a gradual rise in overall heat on earth. Though it may seem like a drop in the bucket, every person who does something to combat this helps. Try to use the most fuel-efficient vehicle you have access to when driving to your next camping spot – especially if it is a long distance away. Alternatively, SUV and RV owners can consider organizing environmentally friendly camping trips in which the participants carpool in one or two vehicles. It might be a bit of a tight fit on the way there, but the satisfaction of green camping is well worth it.

Similarly, it’s best to avoid overuse of “toys” during your camping trip. ATV’s and dirt bikes are great fun, and there’s nothing wrong with taking them out and enjoying them once in awhile. But if you’re using one to, for example, repeatedly travel back and forth between campsites one hundred yards from each other, it may be time to consider using them in a more sensible manner.

Because it can be inconvenient at times, many campers haven’t gotten into the habit of separating trash from recycling during their trips. Most campsites now have separate trash and recycling receptacles readily available though, so the excuses for not separating are quickly running out. All you need to do is set up two bags, and instruct everyone in the party to put the plastic and glass in one and everything else in the other. It’s an easy way to quickly and easily make your camping more environmentally friendly.

If you’re camping off the beaten path, it’s important to pay close attention to what happens to your waste. Have each person dig their own personal latrine both to avoid gross-outs and prevent high waste concentration in a small area. Also, avoid spots anywhere near moving water.

By watching what you do to get to your destination and how you treat your camping area, you can pretty painlessly reduce the negative environmental impact of most every camping trip you take. The changes seem relatively small individually, but they really do add up if made every time you enjoy a vacation in the outdoors.