In the summer particularly, dehydration poses a risk to everyone outdoors – especially hikers and campers. Because they’re outside for long periods of time with limited resources, outdoor adventurers must take extra care to avoid dehydration and its unpleasant, potentially serious effects.
Dehydration’s Hallmarks
The medical definition of dehydration is a condition in which one’s body is lacking the fluids it needs for normal operations. It happens when the body loses more fluid than it’s taking in – a common occurrence in the outdoors – for extended periods of time. When a person gets dehydrated, they lose more than just water. Electrolytes such as potassium and sodium also flow out of the body faster than they’re replenished.
Dehydration has several distinct symptoms, the most obvious being thirst. This doesn’t happen to everyone who’s dehydrated though, so it’s important to watch out for more indirect signs for the condition. If you’re feeling especially weak, dizzy, or are experiencing a dry skin feeling, you might be dehydrated.
What to Do When Dehydration Occurs 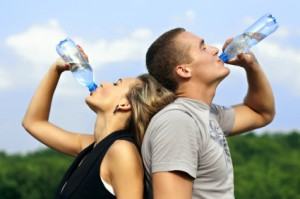 If recognized early enough, mild dehydration isn’t all that difficult to take care of. Just give the person fluids, preferably a sports drink or other solution with electrolytes, and have them rest for awhile. If it’s mild to moderate, they’ll recover fully after a short rest and increased fluid intake.
In severe cases of dehydration – which has symptoms including disorientation, low blood pressure, and rapid heart rate – it is usually necessary to call a doctor. Though dehydration seems to be easily curable, it can be very dangerous if left untreated for too long. In the worst cases, a person suffering from the condition can even go into shock. Thus, if severe symptoms are present, get medical assistance and have the dehydrated person rest with fluids while you wait for help to arrive. Even in the worst examples of dehydration, medical professionals can treat it effectively using intravenous fluids.
A few groups are particularly susceptible to dehydration, including the elderly, children, and infants. Since infants and children often don’t voice a dehydrated condition quite so well, make an effort to keep them well hydrated on especially hot days. In addition, watch out for less frequent urination, dry mouth, and weakness. As serious as dehydration can sometimes be, it is almost always preventable. By drinking plenty of fluids and being able to recognize the condition’s signs, you and your family can have some fun in the sun without worrying about dehydration.

One Reply to “Outdoor Safety: Dealing With Dehydration”