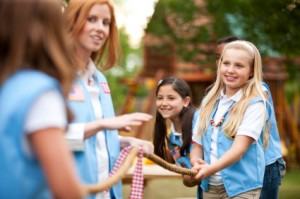 For families that camp enough, the old standbys for fun – scavenger hunts and hiking for instance – can begin to lose their luster after awhile. While they do remain favorites for most, the idea of trying out some alternative camping related activities is certainly worthwhile. If for no other reason than to mix things up a bit, give the following less common games and activities a shot to add a new element of fun to your next camping trip.
The Alphabet Game
Though it doesn’t take place at the campsite itself, this game is an excellent time passer for the car ride to your destination. Perfect for kids who could use some practice with their spelling and reading, it’s kind of a combination between “I spy” and reciting the alphabet. Have everyone in the car start by looking for any word visible outside the car window that contains the letter A. When they find it, they move on to the letter B, and so on. The first person in the car to make it through Z wins. But be careful, this game is surprisingly tough. After all, the letter Q doesn’t appear on many billboards.
Washers
This game, which can be set up easily at just about any campsite, is a bit like horseshoes. Since the objects thrown are light washers, the kids can play much more easily. The game involves two teams of two people, two boxes with an upright rung in the middle, and two small metal washers. The boxes are set roughly 20 feet apart, and each team takes turns tossing the washers at the opposite box. If it lands inside the box, it’s a point. If you get a “ringer” (where the washer falls around the upright rung) it’s three points. The first team to 15 wins. When no one’s in the mood to hike or fish, a full-on washers competition is a great way to spend an afternoon.
Knot Breaker
When the weather’s bad and the kids are stuck inside the tent, boredom – and tension – can rise quickly. If there are no cards or board games around to keep everyone occupied, this game is a good alternative. All you need is a few pieces of rope and some knot tying skills. Tie different knots in each piece of rope, and hand them out to the kids. Suggest they work together to solve these mini-puzzles, and let them have at it. By having them work collaboratively instead of in competition, you’ll be able to keep bickering and frustration under control.

4 Replies to “Camping Games for the Family”