If the world’s meteorologists could somehow find the time for competitive fishing, they’d probably rise to the top of the ranks in a hurry. One of the first lessons in learning how to fish– right after bait selection and presentation – is how weather affects game fish. Their brains might be puny, but freshwater and saltwater fish alike have internal mechanisms that make them extremely sensitive to changes in the weather. And while we humans tend to go about our business rain or shine, weather patterns tend to have a much more profound effect on the activity level of fish. Below are the basics to understanding fishing in the context of Mother Nature’s whims.

It’s All About Pressure 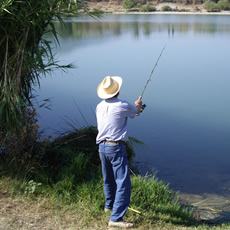 As you could probably deduce, precipitation itself doesn’t have much of an effect on fish. After all, they’re generally pretty wet already. But their environment does react strongly to atmospheric conditions associated with rain – that is, barometric pressure. Put simply, pressure is a measure of the force that the air above us puts on the surface below. In general, pleasant weather, warmer weather, and clear skies are associated with high pressure. Incoming precipitation and cooling air, meanwhile, equates to low pressure.

So, how is barometric pressure useful for fishing? In general, fish are considered to be more active when the barometer is on the move. The majority of professionals in the field believe that rising or falling pressure sends signals to fish to feed before the weather pattern changes.

If there’s a front of higher pressure and warmer temperatures moving in, game fish tend to swim more actively around cover and in lower depths. As the barometer rises, you can use soft plastics and jigs to fish the cover where game fish are congregating. But as air pressure tops out, they like to hunker down in that deep cover, becoming lethargic and hesitant to take lures. Low pressure fronts, associated with cooler air and incoming precipitation, really get the fish moving as they swath over a given area. Fish tend to go on the hunt for food in shallower water before the front fully moves in. So, as the barometer begins to drop, head out with bigger, flashier lures and fish with faster presentations. The feeding frenzy doesn’t long – once the pressure bottoms out and the precipitation starts, lethargy takes its hold on fish.

As you can see, there’s a reason why the best fishermen you know also happen to be weather hawks. They know that changes in the prevailing weather pattern have profound effects on fishing. And whether it’s sunny skies or a vicious storm blowing in, there is a period of good fishing to be had. While weather certainly isn’t the only factor that affects your catch, understanding what it does to the game fish you’re targeting can certainly help bring your skills on the water to the next level.