For outdoor enthusiasts who like to incorporate some water into their adventures, knowing how to canoe efficiently is a must-have skill. While anyone could step in a canoe and paddle without much difficulty, it’s not as easy to control speed and direction precisely or avoid wearing oneself out too quickly from improper technique. Canoe paddling, like any other outdoor skill, takes time and practice to perfect. These two things in combination with the following canoeing tips will help to make you a paddling pro.

The first step to canoeing is, obviously, to get the canoe in the water. In swift currents or rough waters, this is usually done best stern (back) first at a 90 degree angle to the current. As you push the canoe out, get to about shin-deep level in the water and hop in as carefully as possible. Know that it might take a little practice learning how to get in the canoe without tipping it.

Once you’ve gotten in the canoe, it’s time to position yourself for paddling. When there’s just one person in the apparatus, the best spot to sit is typically between the center and the stern. This will allow you to keep balance while simultaneously making it much easier to steer in the water. Now, imagine there’s a box about the width of your shoulders and an arm’s length in front of you. When not paddling, you want to stay within the bounds of the box to keep the canoe traveling straight.

When paddling, remember to move that imaginary box in front of you to one side or the other. This makes you move your whole upper body and helps you avoid the overextension of your arms and shoulders. In addition to this principle, below are a few basic strokes that are useful to know. 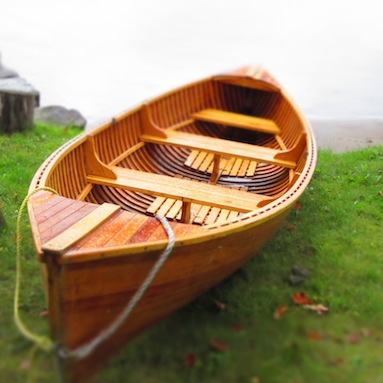 First is the bow stroke. To perform it, grab the paddle towards its middle with the hand whose side you’re going to paddle on, and take hold of the top with your other hand. Don’t attempt to use the lower arm to pull the paddle through the water alone – that’s not very efficient and will tire you out quickly. Instead, push the top of the paddle with your top hand, using the lower hand as a sort of fulcrum for the lever-like paddle. For the bow stroke itself, dip the paddle in the water in front of you, and, using the aforementioned lever motion, push it forward so that the paddle’s blade makes a 180 degree arc in the water.

In rougher rivers or streams where taking the paddle out of the water isn’t recommended, the stroke to use is called a sculling draw. It is similar to the bow stroke, except you don’t lift the paddle toward the back end. Instead, turn the blade so that it glides through the water and make a figure eight motion to bring the stroke back to its front position.

When you’re moving at a decent clip and simply want to steer the canoe, the rudder stroke is perfect to employ. As you might suspect from the name, you simply dip the paddle in the water behind the canoe and turn it much like you would a rudder. Rotating the paddle to the left will cause you to go right, and vice versa.

Knowing basic canoeing technique is beneficial in anything from a float trip to a fishing excursion. The principles are relatively simple, and by using the above techniques, you can improve both stamina and directional control. The next time you go out, just be sure to pause and wait up for the struggling canoeists behind you!