In order to both preserve wildlife and protect yourself in the outdoors, it’s important to know how to identify a sick animal. There are several indicators to watch out for when trying to determine whether an animal is healthy. It could be clearly struggling to survive, acting abnormally aggressive, or even just looking a little off. Less obvious, though, are the underlying conditions that might be affecting the animal. In this article, we’ll explore some common diseases that infect wildlife, and how to recognize them. 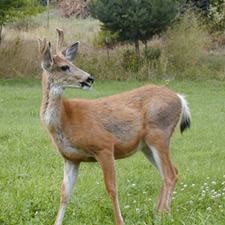 A relatively recent phenomenon, Chronic Wasting Disease (often abbreviated CWD) slowly destroys the nervous system of deer. Unfortunately, not all that much is known about the origins of Chronic Wasting Disease, or why it seems to be spreading at a concerning rate. The disease takes its time to progress, often taking several years to begin visibly affecting its victims. In the wild, deer that are in the later stages of CWD have some very distinguished characteristics. The first thing you’ll notice if you happen across one of these infected animals is their weight. Deer with CWD often begin to starve (or “waste” away), and look very malnourished. Because CWD’s point of attack is at the brain stem, the deer will often stagger, drool, and generally appear lost. Eventually, every single animal that contracts CWD will weaken and die. Though it is not known to infect humans, special attention is being paid to CWD by health and outdoor organizations – so if you see a deer displaying the symptoms, report it to your local conservation department.

Caused by tiny organisms called Sarcoptes mites, mange is a skin condition that, in North America, most often affects the wild coyote. As evinced by the hairless patches that form on coyotes who get them, mange is an extremely irritating infection. In addition to these signature bald patches, infected animals will develop weeping wounds and crusty patches on the skin. Though the parasite can infect people, the fact that physical contact is needed for transmission makes mange in humans very rare. Regardless, you should keep a comfortable distance and notify your local conservation department if you see an animal displaying these symptoms.

Of all the diseases that infect wild animals, rabies is perhaps the most feared. Caused by a fast-moving, hard hitting virus transmitted through bodily fluids, rabies’ hallmark symptoms are mania and aggressiveness. From the point in time of infection, it generally takes wild animals a few weeks to begin displaying these symptoms. If you happen to stumble across an animal that seems to be excessively aggressive or has lost its inherent fear of close contact with humans, it is a wise precaution to keep your distance. Aside from the danger of an attack itself, a bite or scratch from a rabid animal can transmit this potentially deadly disease to you. Naturally, it is strongly recommended that you call your local conservation department as soon as possible. They will be able to put down the animal safely, eliminating the risk it poses to other people and wildlife.