In the United States, carp aren’t exactly a highly sought after game fish. In fact, they’re typically seen as a pest in the bodies of water they live in. Introduced in the U.S. from Europe and Asia, their hearty nature and persistence have given them something of a bad reputation. Anglers typically avoid going after them for sport or food, and they’re even commonly called a “trash fish”. But in their native lands, carp are actually a well-respected and sought after fish. European and anglers prize them for their great fighting, large size, and tasty nature. Read on to take the first step in seeking out this highly underrated species.

Finding a Body of Water With Carp

Since their introduction in the States, carp have thrived in many bodies of water. Today, the Common Carp can be found in almost every major lake and river in the lower 48. Realize, however, that smaller lakes and ponds that have been deliberately stocked aren’t very likely to hold them. Your best bet in finding a good carp lake near you is to do some research. Check out fishing reports from nearby major bodies of water, and talk to local fishermen to see if they’ve run across any. Since they probably don’t go after carp, they’ll likely point you exactly to where they are. 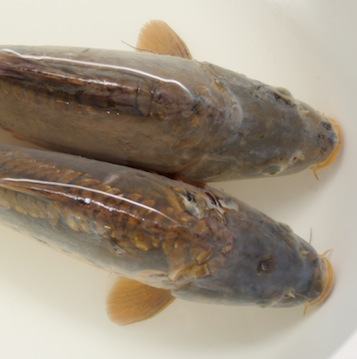 The easiest way to catch the Common Carp is with a good old fashioned rod and reel. This species is no runt – many grow up to 40 pounds and over – so you’re going to want heavy tackle. Poles and reels designed for catfish typically work the best. Most carp fishermen slip a heavy weight down the line about 2 to 3 feet from the hook, cast, and let their bait simply suspend until a carp picks it up. When you set the hook on your first carp, dig in and prepare for a real battle.

Alternately, there is a much more extreme way to harvest carp. It’s called bow fishing, and it’s growing in popularity in the Midwest, where jumping Silver Carp have inundated the Illinois River. They’re stimulated by the sound of a running motor, so bow fishermen simply jet up and down the water, waiting to shoot at a jumping carp with a specialized arrow that has a reeling apparatus. It’s important to not that proper bow training and licensure is necessary to practice bow fishing.

Making Your Own Bait

One of the greatest things about carp fishing is its economy. Expert carp fishermen make huge bulk batches of homemade bait; each has their own secret carp catching recipe. The most popular ingredients are canned corn, corn meal, flour, and cereal. Generally, some combination of these ingredients is mixed together with water into a solid dough, and formed around the hook much like catfish bait.

With the equipment on hand, a place in mind and the bait made up, you’re ready to start carp fishing. You might get some strange looks on the water at first when fishing for carp, but they will turn into admiring gazes when you land your first 40 pound plus lunker.